The New Directions for Sustainable Agriculture Production under a Changing Environment 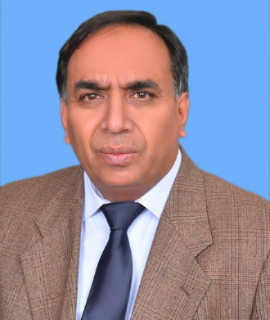 Title : The New Directions for Sustainable Agriculture Production under a Changing Environment

World agriculture is exposed to a rapidly changing environment. It has forced the stakeholders to re-design the whole agriculture system to feed the accelerating world population. A pronounced and observable characteristic of the climate change is “uncertainty”. This uncertainty is manifested in the form of long dry spells; uncertain pattern of sudden, heavy rains; and sudden rise and fall of temperature.  In view of this uncertainty of weather conditions, the concept of development of “Hardy” crop cultivars is proposed. A “Hardy” cultivar would be one which gives stable economic yield under a multitude of environmental extremes i.e., low and high precipitation, and low and high temperature. A “Hardy” cultivar would possess and equipped with “umbrella-like” characteristics to tolerate effects of both “sun” (low and high temperature) and rain (both water-scarcity and water-abundance). Breeding of such crop cultivars are required due to increased weather uncertainty as a result of climate change. Molecular breeding and genomics-assisted selection for plant traits, which favor this concept, be carried out. The recent developments in the omics approaches have the promise to utilize the climate change for successful agriculture production.  One of the traits, to be considered and exploited, is judicious presence of cuticle, both quantitatively and qualitatively. A precise composition and structural arrangement of various cuticle components are important attributes to be considered during development of “hardy” crop cultivars.

Dr. Muhammad Saeed received his PhD degree in 2010 at the Nanjing Agricultural University, Nanjing, China. He obtained the position of an Assistant Professor at the CEMB (Centre of Excellence in Molecular Biology, University of the Punjab, Lahore, Pakistan). In 2011, he joined Department of Botany Government College University Faisalabad (GCUF), Pakistan as Assistant Professor. In 2018, he was promoted as Associate Professor at the same institute. His main focus area of research is Plant Molecular Genetics and Genomics. He has published more than 25 research articles in SCI(E) journals and gave Oral presentations at number of world-renowned conferences/workshops/symposia.